First, I just want to say thank you to everyone who keeps asking about Buddy. There’s not a day that goes by that I don’t get an inquiry from a caring coworker, or a call from a family member about our little guy.  Just last week, my coworker from New Hampshire read on my Facebook page that we were trying to fatten Buddy up, and she brought up a bag of gourmet chicken for him. She told me she and her husband are routing for him and are happy to help.  I should probably add here that they have never met Buddy, and only know his story (and cute little munchkin face) through my posts. Lisa & Rob, thank you so much for not only the delicious food, but for your support. Same goes to everyone else out there.

Now on to the update… 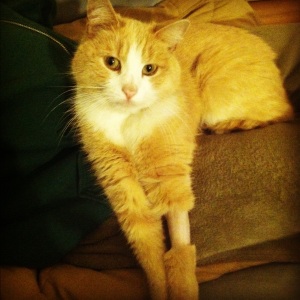 Buddy has been on his chemo medicine for about a month and we have noticed a huge improvement. He actually has energy again. He’s been playing with toys, going outside, and chasing after his brother (also stealing cheese, licking oil & vinegar off my plate, and chatting up a storm…). Basically, he’s the cat he used to be before cancer. Check out this video of him from earlier in the week:

Today we took Buddus to the vet for a follow up appointment. Knowing the nature of his lymphoma and the fact that it’s “multicentric” (that means wide-spread), we were remaining realistic instead of optimistic.

From feeling him, the vet said his lymph nodes were much smaller. She suggested we do an ultrasound to see just how much smaller. And honestly what they found was shocking:

The giant, cancerous mass in his chest is completely GONE! And the lymph nodes in his stomach are significantly smaller!

Everyone at the veterinary office was stunned, including the Dr. who delivered the results…The same Dr. who voluntarily came in four hours early to see Buddy and do his ultrasound.

How is this even possible after only one month of treatment? How can a mass as big as the one he had, which was cutting off his ability to even breathe, just vanish? Two words: chemo therapy, bitches. It’s a beautiful thing.

We’re certainly not out of the woods, yet. We’re still deeply buried in a forest of uncertainly and mystery (like that analogy?). But one thing is for sure: Buddy has never been a “normal” cat—so why should we expect anything different for his recovery?