The Magic Hat Mardi Gras Parade is to me what Christmas is to a small child:

[I could also add a bullet or two here about drunk people, shouting, and the police—but hey, that’s just my family.]

For the past several years, my organization has had a float in the Mardi Gras Parade here in Burlington, Vermont. Being in the parade is the most fun I’ve ever had. Nothing compares with the thrill of cruising down the main street of your hometown in a ridiculous, tricked-out-trailer, while wearing even more ridiculous, over-the-top costumes, with 25,000 people cheering you on.  I love to watch the crowd smile as they discover each approaching float and I’m always blown away by the sheer amount of joy a fifty cent strand of beads can bring to people’s faces. The invisible (but giant) middle finger we’re all giving Old Man Winter also makes Mardi Gras pretty special. 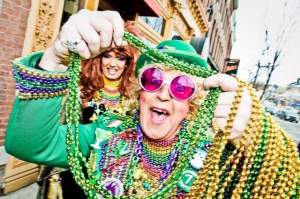 Like all good things, this epic parade time is short-lived. Each float may get about 20-30 seconds in front of each person for a total of 20-30 minutes in the parade. So when you’ve passed the last parade goer, and thrown your last moonpie, it’s common to look at your fellow float riders and say, “Is that it?!” 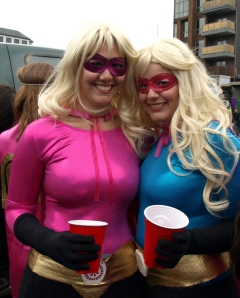 But building…ah, that’s a different story, my friends. It literally takes weeks to plan and execute a Mardi Gras float. The ratio of work time to parade time is so disproportionate that most people would call us “crazy” if they ever found out we gave up all Saturdays in the month of February for the 30 minutes of parade glory.  I like to use the word “dedicated.” There’s a huge sense of pride associated with each float because we give it our all, including our blood, sweat, and tears. Emphasis on the word blood.

Our first float build day this year started off with a phone call informing me, “Rob chopped off his thumb and we’re at the ER!”

We hadn’t even pulled out the power tools yet, and people were already losing limbs. In this case, poor Rob had gotten into a fight with a propane heater, and I’m sad to report the fan blade won. But like the trooper he is, I heard him scream in the background “I didn’t chop it off…I just lost some of it. Hang tight and I’ll be back in an hour.”

True to form, he was back in an hour. He looked slightly pale from all the blood loss and had a perpetual thumbs-up from the bandage, but he was ready! The Mardi Gras Parade is a big deal with my crew and nothing was going to stop him from getting our float ready – not even half of his opposable thumb. 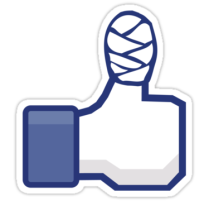 We’re just about ready for the big day. The soundtrack is being finalized, the costumes are picked out, and we’re adding some final touches to the float. Basically, we’re ready to rock this city (pssst…that’s a giant hint of our float theme)!

I hope you’ll come out and support the local businesses who are participating, especially HopeWorks, who benefits from the event. And this year, cheer a little louder for every one. You never know what people sacrificed to bring YOU the greatest floats of all time. Cheers!

Ended the day with a beautiful sunset in Kona. Started with diner breakfast, black sand beach, more sea turtles (still not sick of them), visiting the Southern Most Point in the US, and meeting 4 cats!!! Resort cat I named Smokey 😻
Today we hiked 5 miles round trip to experience a secluded black sand beach and found this gigantic, beautiful sea turtle 🐢 #Hawaii #bigisland @metallidan
First peek at Hawaii 🌈🌊
2 doughnuts, 2 cookies, 2 coffees and 1 cinnamon roll the size of my face for $8.00 @metallidan
Precious angels 🐶 doggie date with @roscoenrosievt (Rosie got too cold and had to go in). Roscoe loves the snow! Sadie is already sleeping #vtdogs #vt #winooski @sheldon326 @evolvinghominid
#dogsofinstagram #dollypartonmemechallenge #dollypartonchallenge