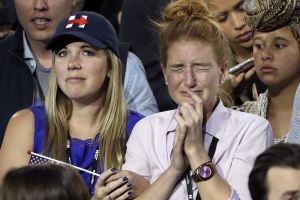 Two weeks ago, we were in London on another one of our cheap travel adventures. We had booked the deal weeks before Brexit and were pretty happy that the timing worked out in our favor. But besides a cheap (er) pound, we weren’t sure what to expect over there. Would Brexit be all that was talked about? Would the pubs be crowded with people drinking away their sorrows? It was hard to know what would happen.

One night, I got accidentally hangry and we ran into the first restaurant we could find. It was busy and the only table available was a shared one in the back of the restaurant. I grumbled, but we accepted. Towards the end of the meal, our British table-mates chatted us and asked where we were from. We had joked before the trip that we would lie and tell people we were from Canada in order to avoid talking about the presidential election. But we found ourselves nonetheless confessing “Vermont.” Instantly the conversation turned to the topic we had hoped to avoid.

“You aren’t from TRUMPLAND, are you?” our British friends laughed.

“No, definitely not!” we replied.

“What a joke your country is right now!” and we agreed.

It went on like this for a little bit—them sharing they had seen Trump say  X offensive thing, us laughing nervously while trying to make it clear we weren’t supporters. Finally Dan was able to pivot to their current crisis.

“Yeah, so what about Brexit? What a disaster that was, huh?”

It was like the music in the room stopped. Instantly their moods changed. Their faces grew stern. “Actually, no. We think it’s great. We think it’s just what this country needs,” they told us. Open mouth, insert foot.

Trump winning yesterday is that interaction all over again, but on a massive scale. I had naively assumed the majority of Americans didn’t support him, that there was no way he could win, and that if he did, I wouldn’t personally know anyone who was happy about his victory. But it turns out, I do know Trump supporters:

-My friend from college who outed herself the day after the election. She said she was offended by the news because there are plenty non-white, non-males who supported him, including herself.  She is not only a college educated female, but half Mexican.

-My best friend’s parents. They are hardworking, good people, who own a local business and are constantly donating food or gift cards from their restaurant to non-profits, schools, and youth sports teams. They even recently held a Calcutta fundraiser for one of their former employee’s grandsons who is sick with leukemia.

-My aunt, who is one of the people I love and respect most in the world. She is smart, reasonable, and is another example of a big-hearted person who constantly goes out of her way for others.

I struggle to understand their decision—to understand how I can like these people when they voted for the exact opposite of everything I believe in. It hurts. It’s hard not to take their choices personally.

But if I play the devil’s advocate for a minute, voting is just as personal a decision as say abortion, the issue I work every day to protect. If these people, these good humans, could find something appealing about Trump, it shouldn’t surprise me that 59 million other Americans could, too. Do I think that all 59 million are the same caliber of decency as my friends and family? No. In a lot of ways, this race, this candidate, granted permission to the racists, sexists, xenophobes, and homophobes to come crawling out of the closets and spew hatred. And I believe that a big chunk of his voters love that renewed hatred and are thriving on it now. But I also have to believe that there are people in this country who are aching for change and for one personal reason or another, truly believed Trump is going to bring that change.

I’ll be the first to admit that I live in a sheltered, unique bubble. I work with nearly all women who share the same belief system. I love a man who has the same political leanings. And I live in a state where the majority of people overwhelming voted for the same candidate that I did. To say my bubble burst on Wednesday morning would be an understatement.

I was devastated. I was in disbelief. I had supported Hillary since the Obama primary. I bought her bumper sticker, tshirts, shared her social media posts, and even forced my way through a crowd to meet and shake her hand at a rally. I endured as a minority in my own state of Vermont through Feel The Bern, staying strong to my convictions and saying, “I’m still with her.” By Election Day, I was confident she was going to win and convinced I’d spend the night celebrating our first female president. I wore my pink Hillary shirt, took selfies, smiled all day, and even bought a giant tub of party mix to figuratively and deliciously mark the occasion. [I know now that was what jinxed it. #thanksobama]

The day after [so yesterday-wow, that seems like a long time ago-] was like mourning a death. Our office felt like a funeral home. We hugged, we cried, we supported each other, we went through the stages of grief. Everyone wore black. It was more of the same when I got home, plus frantically reading and watching everything we could get our hands on to understand how this happened.

I don’t know what else to do. I see people just like me protesting across the country and I just—can’t. I’m tired. I’m defeated. Most of all, I think if the roles were reversed, I’d be calling the protesting side “sore losers.” And because Hillary has been nothing but the epitome of class about this whole outcome, I personally don’t think protesting is the right move.

I’m trying instead to be there for my coworkers and friends. To ask how they are doing or give a hug. I’m trying to do one nice thing a day for someone. I’m trying to take care of myself. Mostly, I’m trying to understand the “other side.” I’m trying to put myself in their shoes. And let me tell you – so far it feels like squeezing my size 10 into a pair of 5’s. Uncomfortable. Before you get all, “Wow, that’s so noble of you, Amy,” let me just make one thing clear: for every one of these good moments, I still have two that involve screaming at the TV or throwing my phone. I still cry. I still worry about nuclear war, about my organization folding, about women’s rights going out the window, about me losing my job, about the KKK, about the rights of my LGBTQAI friends, about the safety of my non-white friends, etc. etc. etc. I’m not over this. I don’t know that I will ever be over this. But I am trying to understand it, and maybe if we all do more of that, we won’t ever be here again.