Dan and I go out to dinner pretty much every Friday night. It’s either because we’ve run out of food, motivation to cook, or both. This past Friday was our first experience in a restaurant as vegetarians. We almost went to our default place – Tiny Thai, which we both agree we could live solely off from- but then remembered that Mule Bar was now selling the Impossible Burger. It was time to give it a try.

For those of you who have no idea what the Impossible Burger is, it’s supposed to mimic a real hamburger without the meat. They tout, “Impossible™ meat delivers all the flavor, aroma and beefiness of meat from cows. But here’s the kicker: It’s just plants doing the Impossible.” I was skeptical, but ordered one anyone. 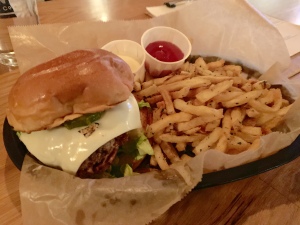 My first impression was, Wow, that actually looks exactly like beef. Not only was it shaped like a burger, but it was even cooked to behave like ground beef, with a brown exterior and pink middle. Then came the smell test and it passed that, too. It shockingly smelled like a burger that just came off the grill. So what about taste? Would it taste just like a burger?

Sort of. The “meat” actually didn’t taste much like anything, IMHO.

After researching, I’ve learned the Impossible Burger is made of coconut flecks, wheat, potato protein, and heme, which is the secret ingredient that gives the burger its meaty texture…and is also, as I found out, a pretty controversial ingredient.

Heme is a molecule found in all living things, from animals to plants. But you need a ton of it to create anything substantial. The company who makes the Impossible Burger found a way to manipulate soy so that it pumped out heme in mass volume. This is part of why the Impossible Burger is controversial: it’s genetically modified. The other reason it is controversial is because up until very recently, heme was not recognized by the FDA as safe for human consumption. A ruling in July of 2018 changed that and now the FDA considers it GRAS (generally recognized as safe). As in, don’t worry, it’s pretty much safe to eat this. We think. As far as we know. There was that one rat who grew an extra limb out of its head, but we think that was an anomaly.

The FDA denial and GRAS status is concerning for me because, to be blunt, the FDA typically sucks at protecting consumers. We assume if an ingredient is dangerous to ingest or put on our bodies, the FDA wouldn’t allow it , right? Wrong. Lead has been found in all major brands of lipstick, formaldehyde in baby shampoo, phthalates in food packaging, and bpa in pretty much every plastic. All of these chemicals are known carcinogens that wreck havoc on our bodies, and yet, are still being manufactured. How? Because many of these products are not required to undergo FDA approval and because they can keep the ingredients a “trade secret.”

At the start of this journey, I wanted to eat less meat because I didn’t want animals to die. But there was also a health component – I wanted to find healthy, protein alternatives to fill me up. And here I am now substituting naturally occurring meat from animals who are part of our food chain, for genetically modified food that a scientist concocted in some lab. Is that really a better choice?

Here are some redeeming qualities of the Impossible Burger:

So, the big question: would I order the Impossible Burger again, knowing all that I know now? Probably not. Controversies aside, I wasn’t super wowed with the taste. And if it doesn’t taste that good, and I have moral reservations, what’s the point? I think I’ll stick to typical veggie burgers for now.