So, you guys, I hate to say it, but things aren’t going well at home.

Baby girl and Bear are NOT getting along. I know it’s only been two days, but I was convinced that I would come home from work yesterday and find this:

Instead, all I’ve seen is THIS:

Strangely enough, it’s the kitten who is doing all of hissing. Bear has been ridiculously mellow and is dying to get to know her. Unfortunately, whenever he approaches her she goes ape shit and starts making these demonic growling noises and raises her hackles. Cause she’s so scary. All 4 pounds of her.

Bear really can’t figure her out. He just keeps looking at Liam and I like, “Really? I’ve got 12 pounds on this chick and SHE’S trying to intimidate ME?” He is not impressed. And unfortunately, he sprayed last night. UGH.

Can I just point out that the website said she gets along great with other cats?! We’re feeling slightly lied to.

They did have a breakthrough this morning though, which was that they smelled each other without a fight erupting. But like all good things, it came to a screeching halt when Bear decided to sneak up on her from behind (seriously, dude, I’m on your side. Help me out a little bit). Kitten lept into the air like a flying squirrel and beelined it to our bedroom. The end.

Have you noticed she still doesn’t have a name?

Between refereeing brawls, anticipating brawls, and following the sound of her pitiful little cry from another unusual place (like when she wedged herself in between dresser drawers), we’ve had zero time to think about names.  We also had all of these sweet names picked out for her, like Sadie, or Nora, or Charlotte that are nowhere close to her personality. She’s definitely a sassy Diva and needs a diva-licious name.  I suggested Beyonce, and before I could even finish my sentence Liam had put the kibosh on it. BOO.

I’m a diva and I know it

The only silver lining so far, and I do mean only, is that she is a phenomenal cuddler. She snuggled on the couch with me for a couple hours last night and then slept right on Liam’s pillow! Now if we could just transfer a small portion of her love and affection from US to BEAR we’d be all set! 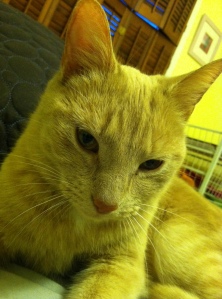 #dogsofinstagram #dollypartonmemechallenge #dollypartonchallenge
🥄🥄
Axe throwing is a lot of fun and so is hanging with these two #jkrow @tunicswithpockets
Some of the Lafayette clan! @emj1724 @edlafayette @sdlafayette @metallidan @jordanla5 @eric_lafayette
BFF day spent ice skating and playing Sweet Valley High and Dream Phone like we were 10 again @sheldon326 love you!
Good list! Created by @karissanickish and @twentysevenlkld

Error: Twitter did not respond. Please wait a few minutes and refresh this page.